The employment data analysts use to track current-year labor market trends are based on a monthly survey of businesses conducted by the Bureau of Labor Statistics (BLS). In March of every year, BLS and state labor departments revise the prior year’s monthly employment estimates based on comprehensive administrative data compiled in connection with the payment of employer payroll taxes for unemployment insurance. This unemployment insurance administrative data is called the Quarterly Census of Employment and Wages (QCEW). In times of dramatic change in economic conditions, there can be substantial employment revisions based on the more definitive administrative data that reflect actual rather than estimated employment changes. QCEW data for the second quarter of 2020 (the months of April, May, and June) recently became available and allow us to get an early look at upcoming monthly employment revisions.

The more precise administrative employment data for the second quarter show a steeper decline than previous jobs data had indicated in New York City retail employment. The chart below shows the February-to-June employment changes, by retail segment, for the monthly survey estimate and the QCEW administrative data. The final column in chart shows the net impact of the revisions. Thus, over all for New York City retail, 89,400 jobs were lost between February and June according to the administrative QCEW data, 26,000 (or 40 percent) more than the preliminary monthly data. Most striking is the revision for drug store employment. According to the survey data, there was a net decline of only 700 jobs from February to June, but the administrative data show a 7,300-job drop. Grocery (food and beverage) stores, a retail segment deemed essential along with drug stores, also experienced a much more significant February-to-June job decline than initially thought based on the monthly survey data. Proportionately, the sporting goods and book store segment experienced the sharpest downward revision. There was also a steeper job loss in the general merchandise segment.

In most cases, the revised data show steeper job loss in the early days of the pandemic when the economy was almost completely locked down. A rebound began for most industries in May. The survey data for the months after June suggest the pace of the rebound moderated through the summer and into the fall, leaving New York City with only 41percent of lost jobs recovered as of October. 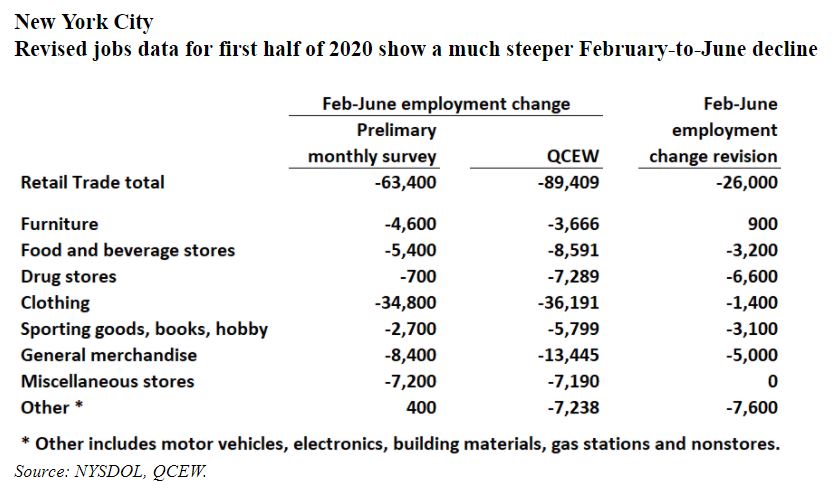 On the national level, the QCEW data show much less significant employment revisions than in the city. Whereas the revisions worsened the city’s retail job decline by 40 percent, for U.S. retail overall the administrative data increased the February-to-June decline by eight percent.

The “Other” industry category in the chart shows a substantially different pandemic trend than seen in the preliminary survey data. This residual category includes five retail segments: motor vehicles and parts dealers; electronics stores; building materials; gas stations; and non-stores. Collectively, the preliminary New York City data had these industries with slightly higher employment in June than in February. However, the administrative data from the QCEW show a combined drop of 7,200 jobs over those months.

Given the unprecedented nature of the pandemic economy and its highly uneven impact on jobs and economic activity, it is not possible to predict what the revised employment data for the third quarter (July, August, and September) will look like. But the likelihood is great that the actual employment level is less than what is being reported in the monthly employment survey.

The new CNYCA report – Pandemic-Induced Upheaval in New York City’s Retail Sector – provides borough-level data for retail industries through June of this year as well as taking a broader look at the labor market impact of the ongoing upheaval in the city’s retail sector. The retail report will be available here after 12 noon on December 16. 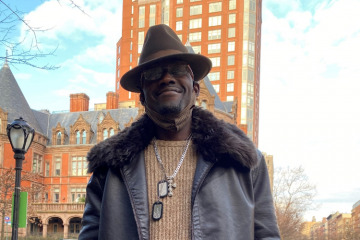 NYCETC’s Member Spotlight series introduces our readers to the wide variety of workforce programs and services that our members offer across the five boroughs,  highlight the ways in which organizations have shifted their services to Read more…

CNYCA’S COVID-19 Economic Update: New York City’s economy will not “snap back” in 2021; data so far for the first six weeks of the year bear that out

COVID-19 Economic Update is a bi-weekly column prepared by economist James Parrott of the Center for New York City Affairs (CNYCA) at The New School, whose research is supported by the Consortium for Worker Education and the 21st Read more…