It has been challenging for economists to make sense of recent labor market and other data. On the one hand, expectations were that the Omicron surge since early December virtually assured a weak January jobs report. Fortunately, Omicron’s severity was less than expected, and the nearly half-million employment gain reported on February 4 was a welcome surprise. But at the same time, many more U.S. workers reported they were unable to work than in the month before because their employer closed or lost business due to the pandemic, and more persons reported being unable to look for work due to the pandemic than in December. With reported virus cases rapidly receding from January highs, hopes are rising that the economy will soon resume its re-opening as millions seek to put pandemic economic and social restrictions behind them.

We won’t get a glimpse of the January New York City employment numbers for another month since there’s always a delay at this time of year as the Labor Department revises the prior year’s jobs data as part of its annual “benchmarking” process to more closely align the monthly establishment survey data with more comprehensive administrative data. The January national jobs data incorporated those revisions, but it will take until March 10 for the release of the revised state and local jobs data.

In the meantime, it might be helpful to look back at how the pandemic has played out differently for different genders, race/ethnic and age cohorts. As our January 26th Update noted, New York City’s pandemic jobs deficit is still far greater than the nation’s (as of December, -8.8 percent locally vs. a two percent jobs deficit for the rest of the country outside of New York State), and a wide disparity in local unemployment rates between whites and Blacks was evident for the fourth quarter of 2021 (6.3 percent for whites but 15.2 percent for Blacks). A deeper dive into the labor force data may shed some additional light on how the city compares with the nation and how different demographic groups here have been affected by the pandemic’s economic dislocations.

First, part of the national “Great Resignation” narrative is that many people have dropped out of the labor force. While there was a 1.5 percentage point decline in the nation’s labor force participation rate from the first quarter of 2020 to the last quarter of 2021, as the chart below indicates, the share of the working age population looking for jobs in the city is down over that period by only a tenth of a percentage point. (To ensure greater reliability in assessing these trends from the monthly Census Bureau household survey, the charts in this Update average data over six months, e.g., the data point shown here for the fourth quarter of 2021 represents the six months through December.)

What’s striking for New York City is the sharp decline in labor force participation for young workers ages 20-24, a group that we know was very hard hit by the decline in restaurant and retail activity, a fact that is echoed in the steep drop in the employment-to-population (EPOP) ratio for this age group in the 2nd chart below. 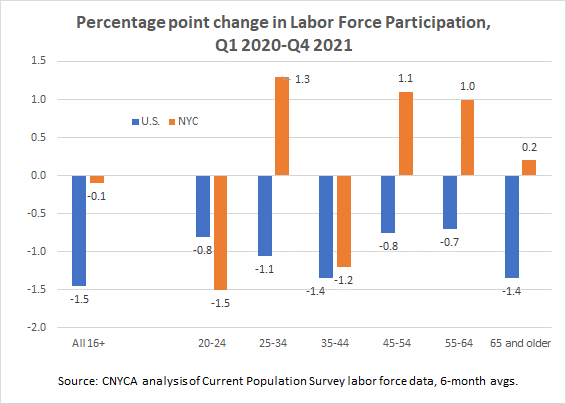 On the other hand, for the next age cohort, workers 25-34, labor force participation has risen by 1.3 percentage points locally during the pandemic while it has fallen by 1.1 points at the national level. This age cohort is by far the largest in New York City, accounting for nearly 32 percent of the workforce, much larger than the 25-34 age share nationally (23 percent). Workforce participation also rose for City workers in the age brackets over 45 where there were declines nationally, particularly for the 65 and older group. Labor force participation has declined significantly in both the city and at the national level in the 35-44 age range that includes many parents of young children (although we don’t have the data to tell how significant that factor is.)

When it comes to EPOP ratios, declines for both genders has been the norm as shown in the chart below, except for females ages 55-64 who increased their employment rate by 6.1 percentage points, while males in that age cohort saw a steep 12.2 percentage point decline in their employment rate. The EPOP for all males has fallen by 5.6 percentage points over the course of the pandemic to date while the decline for females has been a more moderate two percentage points. As suggested above, employment rate declines for young adults, 20-24, were steep for both genders, indicative of the broader erosion in jobs in leisure and hospitality, retail, and arts and recreation that previously employed high shares of young workers. It is not surprising that the employment rate has dropped more sharply for women than for men in the 35-44 age bracket since this cohort includes many parents with young children, and women typically shoulder greater child-rearing responsibilities. 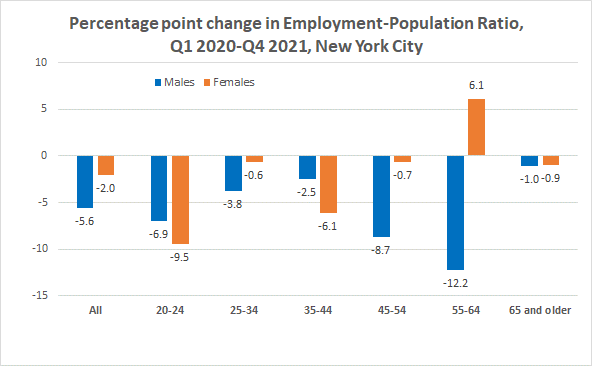 The final chart below shows New York City EPOP ratios by gender and race/ethnicity. Consistent with the higher Black unemployment rate mentioned above (15.2 percent for the fourth quarter of 2021), the employment rate declines for both male and female Blacks were greater than for their gender counterparts in other race/ethnicity groups. Asian and other males have also experienced a fairly steep employment rate decline. Limitations in the sample size of the Current Population Survey constrain our ability to probe more deeply, e.g., in looking at workers by race/ethnicity and industry or occupation, in trying to better understand how the pandemic’s economic disruptions have played out across more detailed subcategories within the city’s workforce. 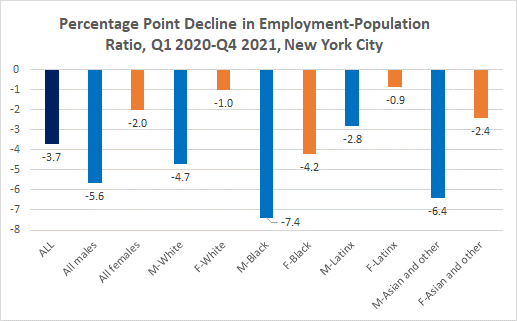