New York City has recovered 70% of its pandemic job loss, but leisure and hospitality and jobs supporting office workers are likely to continue lagging; 15 industries have bucked the trend and increased jobs above pre-pandemic levels.

While the December and January surge in the Omicron variant slowed New York City’s rebound from the pandemic’s employment shock, it certainly did not bring it to a halt. For the first two months of this year, New York City gained a monthly average of 16,000 jobs. By way of comparison, however: During the first six months of 2021 the city gained a monthly average of 26,000 jobs and that slowed to a monthly pace of 22,000 job during the last six months of 2021.

As of the latest month of New York City payroll jobs data, the city’s total employment level remained 5.9 percent lower in February 2022 than two years before, and private sector employment remained down by 6.4 percent.

The national jobs update released April 1st showed another month of steady job growth in March, reducing the U.S. unemployment rate to 3.6 percent and bringing the national rebound to 93 percent of the jobs lost during the pandemic’s first two months. By contrast, as of February New York City’s unemployment rate was 7.0 percent (nearly twice the national rate), and the city had regained only 70 percent of its pandemic jobs deficit. (The U.S. rebound as of February was 91 percent.) The share of adults working or looking for work – the labor force participation rate – was one percentage point below the pre-pandemic level for the U.S. and 1.3 percentage points below the February 2020 level in New York City.

New York City’s total jobs level was nearly 280,000 lower in February of this year than two years ago. Nearly 90 percent of the jobs shortfall occurred in the face-to-face service industries, particularly accommodation and food services (-82,500 jobs), retail trade (-38,300), construction (-25,300), and other services (-20,800). Both educational services (mainly private colleges and universities) and arts, entertainment and recreation also were down about 19,000 jobs.

There will be further job rebounds in many of these industries in coming months as there has been over the past year. However, there will also be some degree of residual job shortfall in many of these sectors for at least the next year or two. The leisure and hospitality industries (accommodation, food services, and arts and recreation) and retail trade are both affected by the dampened tourism outlook and a still-creeping return-to-office pace. For the first two months of this year, the number of occupied hotel rooms was 47 percent below the same months in 2019, employment in food services and drinking places was 19 percent lower, and retail employment was down 12.5 percent from three years ago. 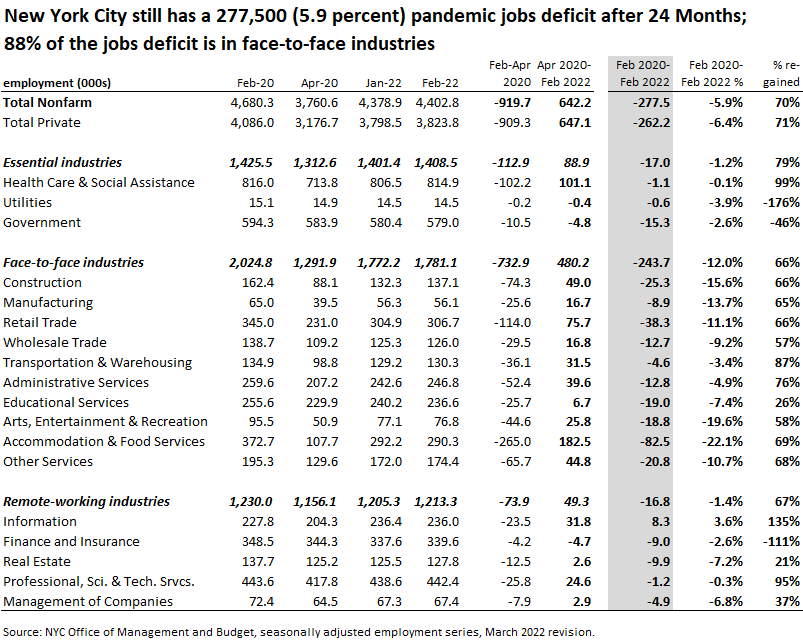 In its most recent forecast, NYC & Company, the city’s tourism marketing organization, projects that the number of visitors to New York City is not expected to surpass the 2019 level until 2024. While business travel is expected to double this year, the business traveler share of out-of-town visitors likely will be only 16 percent in 2022 compared to the pre-pandemic 20 percent share. Indicative of a growing consensus that hybrid working is becoming permanent, a recent survey by Stanford University economist Nicholas Bloom found that New York City office workers plan to be in their offices about half as often as before the pandemic.

The impact of remote work on transportation indicators is evident in MTA data showing that bridge and tunnel traffic was down only 2.5 percent in January and February of 2022 from the first two months of 2019. Commuter rail ridership, however, was down by half, apparently indicating that some commuters are reluctant to return to mass transit and that remote work is leading to different travel patterns. And according to New York City Taxi and Limousine Commission data, the number of Uber and Lyft trips was down by 27 percent for January and February, but medallion taxi trips (which tend to be more heavily concentrated in Manhattan) were down by 63 percent for this January and February compared to the same months of 2019.

The muddied outlook for commercial construction due to the likelihood of lower near-term office space demand is a factor in the city’s 16 percent construction employment decline compared to two years ago. Nationally, by way of comparison, construction employment is slightly above the February 2020 level. Similarly, New York City employment in finance, insurance, and real estate taken together are down by about 19,000 from pre-pandemic levels whereas employment in finance and insurance nationally is above the level from two years ago. The number of real estate jobs is 7.2 percent in less than two years ago in the city compared to a far smaller 1.2 percent national decline.

On the other hand, despite the economic disruption caused by the pandemic, a number of industries have managed to increase net employment levels in New York City over the past two years. Figure 2 shows 15 industries that have added a total of 53,600 jobs since February 2020. Noteworthy trends include: 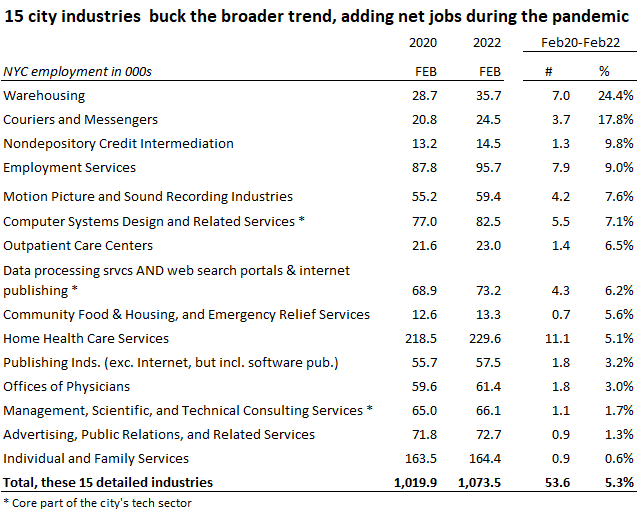 Although the core tech industries just cited have been increasing their employment, their combined 5.2 percent job growth since February of 2020 lags the 8.8 percent national job growth for those industries. 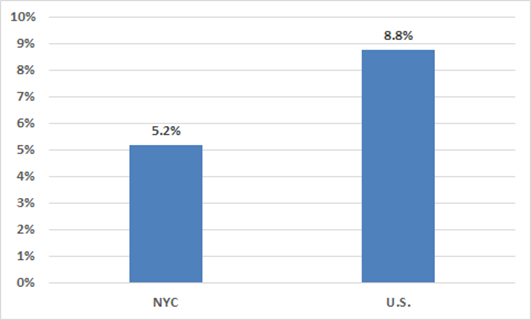