Recovering industries continue to account for most of the city’s job gains; the number of households turning to public assistance is rising sharply.

The latest jobs data from the State Labor Department show that New York City experienced reasonable job growth in February and March, but as has been true for the past year-and-a-half, most of the job gains in the past two months occurred in industries recovering from pandemic job declines. Only a handful of industries have generated net job gains that put their employment levels above pre-pandemic levels.

The city’s unemployment rate dropped to 6.9 percent in February to 6.5 percent in March, demonstrating a greater decline than for the country as a whole with the national unemployment rate dipping from 3.8 to 3.6 percent. It’s not clear how the city’s unemployment picture has been affected by a reported population decline. The city’s labor force participation rate is only 1.2 percentage points lower than before the pandemic. However, according to the monthly unemployment data series for New York City that is based on a survey of resident households, there has been roughly a 400,000 decline in the city’s population since the beginning of the pandemic, and a 430,000 employment decline. In comparison, the survey of business establishments shows a net payroll job decline of 241,000 between February 2020 and March 2022.

On a seasonally adjusted basis, the city added 27,000 jobs in February and 31,400 in March. As of the latest month of New York City payroll jobs data, the city’s total employment level remained 5.2 percent lower in February 2022 than two years before, and private sector employment remained down by 5.4 percent. See the figure below.

Over the past two months, continued recovery in accommodation and food services employment, and growth in tech jobs and home health care boosted the overall job gains. For the first time since mid-2020, the construction industry added jobs. Local government recorded a 4,100 decline in jobs in March, bringing the total decline since February of 2020 to 20,000. Unlike the hotel and restaurant part of the broader leisure and hospitality sector, the arts, entertainment and recreation industry reduced jobs over the past two months.

Two-thirds of all jobs gains recorded over the past 12 months have been in the face-to-face industries that were hardest-hit by the pandemic. The sizable and high-paying finance and insurance sector added only 2,200 jobs (0.6 percent) over the past year. Employment in company headquarters facilities in New York City in March was still 4,200 jobs below the pre-pandemic level. Employment in the real estate industry was 10,200 less in March than pre-pandemic. 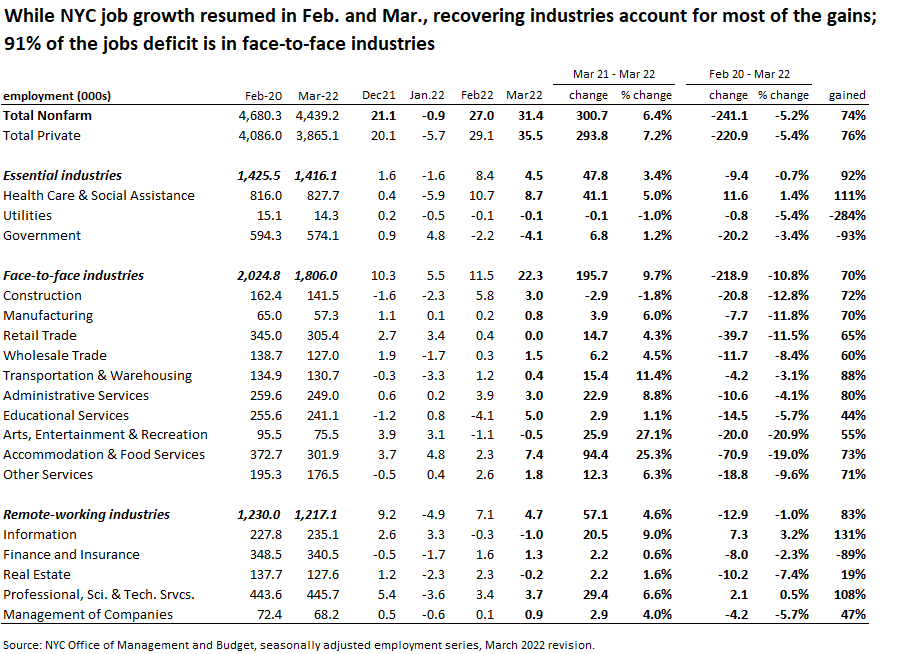 For much of the pandemic period over the past two years, federal aid helped many households cope with serious economic and other dislocations. However, an estimated 800,000 city residents stopped receiving federal unemployment assistance last September when that aid expired. And in December, tens of thousands of city households received their last advance child tax credits that were authorized by the American Rescue Plan Act. So it is not surprising that there has been a sharp uptick in New Yorkers applying for cash assistance and Supplemental Nutrition Assistance Program (SNAP, formerly food stamps) aid in recent months. As the figure below indicates, there has been nearly a 25 percent increase in the number of temporary cash assistance recipients in New York City compared to the pre-pandemic month of February 2020. The number of people receiving SNAP benefits was nearly 1.7 million in February of this year, 15 percent above the pre-pandemic level. Medicaid rolls have also steadily risen and are up over 22 percent to 4.15 million. 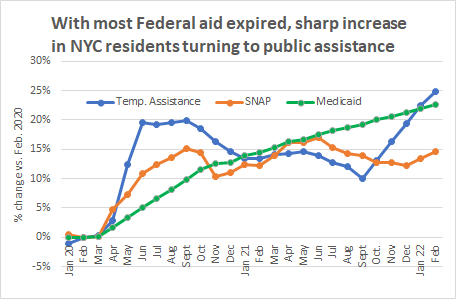